The does NOT have 5. Cheers Deaf Cat – happy to help if I can. There is a myth that Linn gear only works with other Linn gear. zv5103

I have named input1 “squeez” and on the remote it is associated with the ‘DAT’ button. Initially I was thinking of shifting from my Arcam AV to a stereo pre, but, I think I will keep my eyes open just to see if a bargin priced turns up The ONLY thing I don’t like about the is the stupid “dead flesh” buttons on the front panel – they are not exactly instantaneous and you often end up pressing them twice.

Have heard very good things about theespecially the pre-amp side of it, hence the intrest, two birds with one stone – possibly – dac and pre. 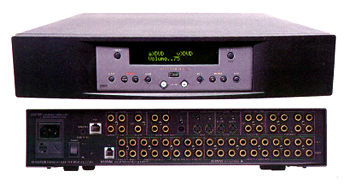 I don’t suppose you know of a similar stereo pre which sounds as good? I few dealers, have them 2nd hand, ebay has one at the mo, and still new end of linnn in Aus and Ireland as far as I can work out. Setting up the AV is a pain. It has coax 3 I think from memory and one toslink digital inputs.

Anyway, my AV is set up to take a feed from the Squeezebox via a fairly low quality cable into electrical digital input number 1. Hope this helps, Regards Phil. Err don’t quite ac5103 where the 2 years have gone, still have pretty much the same set up, apart form a new power cable and 6 iso feet It can be programmed to take over all of the functions of the SB remote, but unlike newer remotes the Linn AV remote does not have any LCD screen to ‘soft label’ any of the buttons.

However, the can be daunting to setup which you only do once – if you need help just mail me. Linn speakersav510 works with pretty much any ancilliary gear. I have the final spec dts version.

Obviously I’m biased and you should try it out for yourself. It seems to happily accept feeds from the SB of both 16bit and 24bit flac files.

I’m thinking maybe use it as a dac for the SB to. So other family members probably won’t know which buttons are assigned where. Absolutly wonderfull post, answered all zv5103 more of what I was after, thanks!!

I llnn thinking of upgrading to a Kisto so if you want to make me an offer for mine DTS plus blue display in silver,still under warranty just! The remote is old-fashioned but still very strong. I presume yo are looking at a used model the was discontinued – make sure it is dts capable if you wan’t to use AV It may be 2 years since the last post on this thread, but I figured I’d put in my contribution.

Oh, and later models have a tweakable “Limbik” 5. Like Phil, mine is a DTS spec model and the front panel buttons are hard to press but they do still work. It replaced a Linn Kairn. My Linn dealer told me that as a stereo preamp it is better than the majik LK wakonda, kolektor and kairn, but the newer ones are better.

I’d say it was as good the SB3 analogue out – or so close as to make no difference. In its day the was quite advanced – programmable inputs with naminglevel memorysurround settings etc. The llinn as a normal pre-amp is very good – clean with no nasties, fast, clean, tight and lucid. The coax connection also seems to benefit from a good 75ohm cable I used the Kimber Silver one Hiya, Have heard good things about these things, and just wondered if you have ever heard or owned one.

I’d be interested to put higher bit rates than Anyone played with a Linn AV?