To receive news and publication updates for BioMed Research International, enter your email address in the box below.

This is an open access article distributed under the Creative Commons Attribution Licensewhich permits unrestricted use, distribution, and reproduction in any medium, provided the original work is properly cited. Little data exists regarding outcomes following TKA performed with surface-cementation for the fixation of modular tibial baseplates with press-fit keels.

These results support the surface cement technique with a modular grit-blasted titanium surface and cruciform stem during primary TKA. Although results of tibial component fixation with cement in total knee arthroplasty TKA have been good, [ 1 — 14 ] the ideal technique of cementing is still debated [ 15 — 18 ].

Previous biomechanical studies have demonstrated that surface cementation does not increase early micromotion compared to fully cemented baseplates, assuming adequate cement penetration in the proximal tibial surface [ 2125 ]. After institutional review board approval, we retrospectively reviewed the surgical database of a single experienced surgeon at a major academic institution.

Patients were included in the study, if they had received a modular titanium baseplate with a cruciform keel using a surface cemented technique and had a minimum five-year followup or failure of the TKA prior to five years. Failure was defined as revision for any reason; all patients that failed regardless of the length of followup remained in the analysis.

Sixty patients 65 knees died prior to a five-year followup and had not undergone revision TKA at the last followup; these patients were removed from the analysis.

Additionally, knees did not meet the inclusion criteria and had not failed at last followup and were therefore excluded. This resulted in a final series of knees from patients. Patients were followed according to a prospective clinical and radiographic protocol for primary and revision TKA that has been consistently used at our institution sincewith scheduled followup at 2 weeks, 6 weeks, 6 months, 1 year, and every years thereafter.

Mean followup was 8 years, including those who failed prior to five years range, 0. The clinical scores and implant records were obtained from the database. Clinical results were graded according to the Knee Society Clinical Rating System by a member of the research team other than the operating surgeon [ 26 ].

For this study, the preoperative and most recent follow-up knee scores were compared, as well as documentation of the number of failures, reoperations, and complications. Long-standing anteroposterior view of lower extremities and weight-bearing anteroposterior, lateral and merchant radiographs were obtained at six weeks.

The same films were taken at each followup without the long-standing view. Radiographs were evaluated by one of the authors according to the Knee Society Total Knee Arthroplasty Roentgenographic Evaluation and Scoring System [ 27 ] for radiolucent zones, femoral component flexion and valgus, tibial component slope and varus, and anatomic axis was measured on the longstanding film for overall mechanical alignment.

Surgery was either performed under general or spinal anesthetic with a femoral nerve block after A standard medial parapatellar approach was utilized for all cases.

The femoral preparation utilized intramedullary referencing with a goal of four to five degrees of valgus relative to the anatomic axis of the femur for the distal cut.

The remainder of the femoral preparation was performed with the use of a standard posterior referencing guide with the goal of rotational alignment being parallel to the epicondylar axis using a measured resection technique.

After the cut surface of the tibia was checked for proper alignment, the tibia was broached with a cruciform tibial punch slightly undersized from the real tibial keel to achieve true press fit. The tibial implant consisted of a modular titanium baseplate and cruciform stem with a grit-blasted titanium surface with an average surface roughness of 6.

In order to ensure adequate depth of cement penetration, a 2. Pulsatile lavage was then used for final surface preparation. When appropriate, the mixture was combined with the fluid component, mixing for one minute by hand, and then allowed to sit for one minute, after which it was applied to the undersurface of the tibial baseplate in a low-viscosity state.

Values less than were considered statistically significant. Of the knees, were female and were male. The average age was 62 years range, 30—84 years and the average body mass index BMI was Of these, one was revised at 4.

In one knee with two zones with radiolucency, the component did not show knew of loosening or subsidence and the patient had no complaints of knee pain. No knees had lucencies on a lateral radiograph or complete radiolucencies, and thus no tibial component was deemed radiographically loose.

Retention of the tibial component during revision of the femur, patella, or polyethylene insert occurred in 18 4. Although support for the technique of surface cementation with press-fit designs of the tibial component exists in the literature, [ 2428 ] other studies have demonstrated higher failure rates with this technique [ 2029 ]. However, they report that overall, only Additionally, Arora and Ogden [ 29 ] felt that the surface cementing technique may have been a contributor, along with polyethylene wear and a rotationally loose patella, to the high rate of osteolysis seen in their study.

Given a lack of consensus in the literature, we set out to determine our experience using a modular titanium tibial baseplate implanted with surface cementation technique. This longitudinal series of a large number of TKAs demonstrates that the surface cement technique in the setting of total knee arthroplasty can be performed safely and effectively.

Two cases of suspected aseptic loosening of the tibial component were identified and very few knees demonstrated radiographic radiolucencies. There are limitations of the current study. First, the retrospective study design imparts the possibility for selection bias. There was a high loss of followup, in the part related to the large geographic region of referral for our tertiary academic medical center. We attempted to contact all patients by telephone and electronic medical records review.

We included all known failures that occurred in bipmet than 5 years, but patients otherwise lost prior to completion of five-year followup were excluded, which would likely account for a greater proportion of failures in our cohort, given that the majority of revisions return to our center.

In addition, there may be some selection bias against the use of the surface cemented technique in knees with bone loss or poor bone quality by the surgeon, in which cases a fully cemented tibial component, instead of surface cemented, may have been used. We kneee only 3.

Finally, our conclusions must be limited to similar technique and implants. It is possible that a similar technique with other implant designs nonmodular, smooth, cobalt-chrome or all polyethylene tibias, etc.

The conflicting surgical results reported with viomet cementation in the literature suggest that several variables including implant design, surgical technique, and tibial bone remodeling or response may play a role in determining implant survival.

Implant design has been shown to be a critical factor influencing the success of surfaced cemented tibial components. For example, one of the most widely cited studies critical of surface cementation exhibited high failure rates with a macrotextured waffle-pattern tibial base plate [ 31 ].

The idea that this particular implant design may be ill-suited for surface cementation was illustrated in a biomechanical study by Inee et al. This same study demonstrated a stronger but not significant difference in the bond between titanium and cobalt-chromium alloys. Bundy and Penn [ 33 ] also report on the surface preparation and suggest that both roughened surfaces and highly polished surfaces improve the metal and bone cement interface.

They suggest that altering the surface topography and roughness is the most effective way to change the strength of the metal and bone interface. Surgical technique, including tibial surface preparation as well as cement pressurization or penetration into the cut surface, is likely also important.

Prior biomechanical studies have supported that the surface cement technique affords similar baseplate fixation as compared to the fully cemented technique, including eccentric loading as may be seen in varus and valgus alignment [ 1524253234 ]. Several studies have also stressed the importance of optimal cement penetration to provide sufficient initial mechanical bond strength of the tibial base plate [ 15242532 ]. In order to further enhance surface cement penetration, Dorr et al.

An additional important factor regarding tibial component fixation and technique is the response of host bone to the implant.

Separate midterm in vivo studies support the concept that cementation of the stem or keel portion of ,nee tibial component is associated with reduced density of bone in the tibial metaphysis, which may be associated with inferior component survival [ 3637 ].

Given these biomechanical studies and our clinical results, the authors utilize the surface cement technique commonly and make no alterations to postoperative rehabilitation protocols, allowing for immediate weight bearing as maxom and rapid recovery techniques without compromise. We have confirmed previous reports of kbee results using a surface cementation technique of the tibial component.

If a properly designed implant is used in conjunction with proper surgical technique, early implant stability can be achieved. As the number of TKAs performed in North America increases exponentially in the next several decades, [ 38 ] continued effort to define optimum implant design and surgical technique will become increasingly important. Given the positive clinical and radiological outcomes seen in this series and only a small amount of complications demonstrated along with the theoretical advantages of improved proximal tibial bone density and less tibial bone loss at the time of revision, we feel that surface cementing the tibial component is a reasonable technique for consideration in total knee arthroplasty. 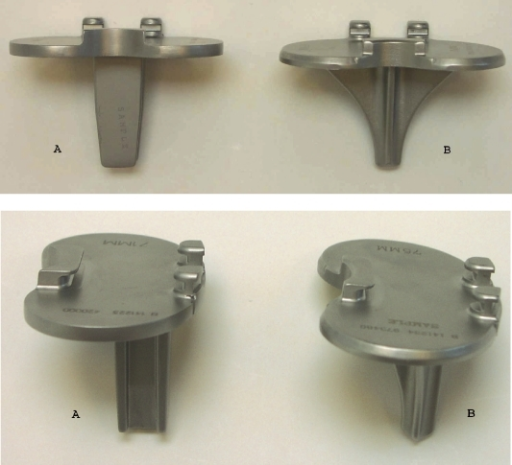 Table of Contents Alerts. Abstract Little data exists regarding outcomes following TKA performed with surface-cementation for the fixation of modular tibial baseplates with press-fit keels. Introduction Although results of tibial component fixation with cement in total knee arthroplasty TKA have been good, [ 1 — 14 ] the ideal technique of cementing is still debated [ 15 — 18 ].

Materials and Methods After institutional review board approval, we retrospectively reviewed the surgical database of a single experienced surgeon at a major academic institution. Histogram demonstrating the number of bkomet available for followup. Tibial surface after preparation with drilling sclerotic bone and pulse lavage. Pressurization of cement with nozzle into cut tibial surface.